The hospital in your pocket – Tricorder

What’s the most useful electronic device that fits in the palm of your hand?

If you’re thinking of your mobile now, forget it. Say hello to the TRICORDER.

“I’m a doctor, not an engineer!” This famous catchphrase is from Dr. McCoy, the character from the mythical Star Trek, a TV series that changed the history of science fiction in the 20th century. Nowadays, the 60s style of the series doesn’t hold up and even laughable in parts (no offense, my dear Trekkies!). However, regardless of whether you liked the series or not, the importance of this TV show goes much further.

The ideas were revolutionary at that time. Mixed race crews, a Russian, a black woman… Let’s also remember that when the show premiered races were separated in the United States, and the Cold War was still too fresh in our minds to make predictions about collaborations with Russia.

At a technology level, it’s interesting to note that some ideas did emerge from the show and later acted as a guide for cutting-edge tech devices in the real world. For example, very few people know that Google’s Pixel Buds real-time translation service (earbuds capable of translating up to 40 languages) has its origin in Star Trek’s universal translator (“combadge”).

In the field of medicine, the Tricorder really stood out. The device checked patients’ vital signs without the need to touch them physically. Its technology was also tremendously futuristic for the time (remember the first episodes were produced in the 1960s) and it could perform an initial diagnosis in almost real-time. After Dr. McCoy heard the iconic “bip bip”, he could instantly see just how serious the patient’s illness was.

What is it? Well, long story short for those who sadly never got the chance to follow Star Trek is that it’s the core device for the next generation of doctors.
A small gadget that combines various departments: radiology, biochemical laboratory, and resident 😉and it fits in your pocket!

The name “tricorder” refers to the medical device’s three functions: scanning, analysis, and diagnosis. And it all comes in a single handheld instrument. So, what’s with this super gadget? Is it about to be implemented in your hospital?

More than likely, no, but let’s take a look at the state of play:
A tricorder is extremely useful, and undoubtedly, its completion would be welcomed by the medical community. There’s a whole range of benefits that we’ll look at later. So, nobody was overly taken aback when someone finally provided the incentive to create the device outside the world of science fiction.

No surprises, it was Peter Diamandis who created the Xprize Foundation in 2012 that then went on to launch the Qualcomm Tricorder XPrize. A five-year competition (after all it’s a tricorder, not an app!). The prize, millions of dollars. Now that’s a whole lot of incentive.

What were the general requirements for devices submitted to the competition?

Drum roll please … and the winner is…

DxtER from Final Frontier Medical Devices in Pennsylvania that picked up the top prize of $2.6 million and the second prize of $1 million went to Dynamical Biomarkers from Boston. 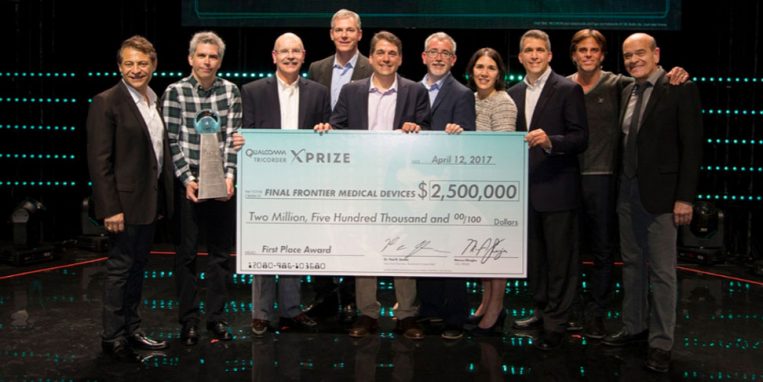 In an interview with The Washington Post, the team behind the DxtER explained that the device is capable of diagnosing up to 34 different health conditions after the initial check-up. These include diabetes, hepatitis A, hypertension, anemia, pneumonia, mononucleosis, urinary tract infections, and also the absence of any of the pathologies. And, what’s even more revolutionary is that it can be used in the comfort of the patient’s home by simply following the steps indicated on the device.

How does it do it?

Remember that we want to get all this data non-invasively with a simple scan (and I don’t mean anything like a CAT or PET scan…).
In theory, you don’t have to touch the patient’s body at all!

However, in the end, the DxtER requires some form of physical contact. In fact, the kit – weighing in total just over 2kg – includes five peripherals that must be placed on different parts of the patient’s body and are connected to an iPad Mini via Bluetooth. The user can then see the results obtained from the analysis in a matter of minutes.

Is it available to buy?

As with any new device in the world of medicine, at the moment the DxtER is in a test phase. One of the centers testing the device is the Lankenau Medical Center in Pennsylvania (USA) where Basil Harris, one of the device’s creators, works.

Even so, Final Frontier Medical Devices work is far from over. The Qualcomm X Prize Foundation who organized the contest committed to investing a further 3.8 million dollars to perfect the prototypes – in addition to the DxtER, the other Tricorder finalists will continue to receive funding – and bring them to the final consumer

The organizers demanded that the prototypes presented had a more or less affordable price tag. In other words, they wanted cutting-edge technology but not at a prohibitive cost.

According to estimates from Charron (one of the creators), once the DxtER is optimized and approved by the health authorities, it could be bought for somewhere between 200 and 400 dollars.

What will we do with the tricorder?

The use of the DxtER in the patient’s home would perhaps seem the most obvious. However, the creators of the device claim there are multiple options.

For example, its use in the emergency department of a hospital could speed up the diagnosis and treatment of certain patients. This could also be the case in emergency situations, such as in the management of humanitarian tragedies, refugee camps or natural catastrophes.

In light of these ideas, let’s take a look at the pros and cons.

There are still many open questions as we still don’t have any knowledge of the real-life impact of such a device.

With these pros and cons, I think it’s clear that the margins for implementing the controlled use of the device must be very well defined before being put into use in health systems.

In addition to some safety guides and the constant control of a professional, a bit like self-service checkouts.

And here is where the doctor comes in, patients will always (at least for now…) need doctors as interpreters. However, emancipating the patient is useful and will be possible in the future. Plus, data collection will be great for doctors, both in terms of the detailed monitoring of a specific patient over a lifetime and in creating big data.

You won’t see it on the market now or in the near future. The prototypes out there all look a bit too big and clumsy and nothing like the stylish models we asked for!

But the Tricorder faces legal challenges along with technological ones. All the state health authorities are currently against the implementation of this technology (a huge surprise, considering how liberal and flexible they are normally).

However, at a time when the viability of the universal health service is in doubt, a device capable of making the data collection of patients easier, increasing the efficiency of the health system, and incorporating medicine into the daily life of the general population offers a particularly appealing prospect that’s too attractive to be brushed aside.

Conclusion, there’s still a lot of work to be done, but the idea is definitely worth it.

Big Data and the Future of Healthcare Delivery with John S. Brownstein
November 20, 2018